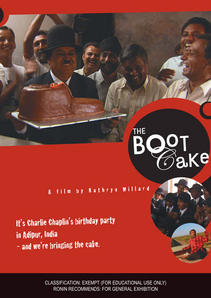 Award-winning Australian film-maker Kathryn Millard stumbled across the beguiling Charlie Circle during research for another film project. She was immediately invited to join their 116th birthday celebrations, which included a parade of Charlie Chaplin look-alikes through town along with dancing girls, floats, strolling musicians and a camel. Would she do them the honour of bringing the grand centrepiece: the birthday cake?

And not just any cake, but one in the shape of a boot, as homage to the famous scene in The Gold Rush, where the starving Tramp boils and eats his own boot.

This was the improbable beginning of an intriguing journey, which takes us from the luxurious kitchens of a posh Mumbai hotel, into the bustle and exuberance of India, where Chaplin is at home on shrines alongside revered Hindu god Krishna. Along the way, we're introduced to some of the world's earliest Chaplin imitators including Australia's Ern Vockler. After all, Charlie look-alikes were on the scene long before Elvis. We meet a host of Charlie devotees: Dr. Aswani, the founder of the Charlie Circle, Tollywood and Bollywood megastar Kamal Hassan, young aspiring actor, Viswajeet and the urbane Mumbai Charlie, Prevan. We ponder the spiritual resonance felt by so many people for the battler with his toothbrush moustache and baggy pants.

The Boot Cake explores how one community, reeling from the tragedy of the Gujarat earthquake that killed 200,000 people, finds hope and inspiration in the comic genius of Charlie Chaplin, one of the global icons of the past century. We see through their eyes, the pathos and humour of this unique physical comedy and the bitter-sweetness of his philosophies. And in moments of pure Chaplinesque absurdity we find ourselves sharing Kathryn's concern that the chocolate truffle sponge with the cashew marzipan icing will melt in the 50 degree heat.

"Funny, poignant and thought-provoking, The Boot Cake layers film clips, impersonators, interviews with behind-the-scenes footage of Charlie's Adipur birthday party. It is a story of resilience, unorthodox spirituality and ultimately, the power of cinema."

The unusually blue eyed Indian Doctor Aswani founded the Charlie Circle in Adipur in 1983 - which filmmaker Kathryn Millard discovered accidentally during her research for a Chaplin doco. She was intrigued by the longevity of the cult of Charlie Chaplin, and this club is clear evidence that it's not so much a cult as a virus. The whole town is infected, and perhaps only marginally more so than the entire world.

It says something of the enduring legacy of the Tramp that Millard was given the task of making the special cake to celebrate Chaplin's 116th birthday. This task forms the spine of the doco and she has used her filmmaking skills well to explore the linked phenomena of Chaplin and the poor village with a Charlie fetish.

Along the way we meet Dr Aswani, who reveals that one of his most common cures is giving his patients a copy of a Chaplin movie. Living proof, if we are to believe him, that laughter is indeed the best medicine. Indeed, Chaplin's powerful effect of making people happy has spurred Aswani to make Chaplin his god, complete with a little altar and Chaplin figurines - sharing space with Krishna. (Elvis fan will empathise...)

It was Gold Rush that bewitched him, and the film is the centrepiece of all celebrations.

But along the way, Millard touches on Chaplin's global appeal, and we see how Chaplin's everyman character is the glue that unites his fans and provides the empathy they need to cope with life. Like Charlie, many are crying inside, struggling to survive, but Charlie gives them his cane to lean on. And his smile.

Follow this link to view trailer of THE BOOT CAKE: www.youtube.com/watch?v=BxaZxKsGlOw&feature