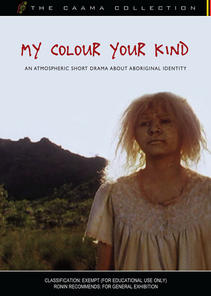 This atmospheric short drama was made on film in 1998 and serves as a showcase for some of the outstanding talent nurtured by CAAMA at that time, supported by filmmaking talent from elsewhere including Safina Uberoi and Jackie McKimmie.

In a sequence of simple, emotionally charged scenes, MY COLOUR, YOUR KIND gives a powerful impressionistic insight into the feelings of alienation experienced by a teenaged albino Aboriginal girl. In a convent boarding school in Alice Springs, she is misunderstood and bullied by a severe, unloving nun. She escapes in dreams and eventually in reality to her mother living in a camp, where she feels at peace.

As an exploration of Aboriginal identity, the film makes a strong contribution, evoking the subjective feelings of someone whose sense of identity is more powerful than the mere surface of her white skin and her blonde hair.