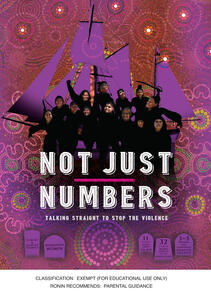 "We do not want to be invisible anymore. We are not just numbers."

Not Just Numbers is an inspiring documentary about the Tangentyere Women's Family Safety Group in Alice Springs. They believe in talking straight about the violence in their communities and are working on the front line in prevention, with very little funding or outside support. So often reduced to statistics, these heroes have banded together to fight for their lives and the lives of their families. They want to be seen and heard, not just counted.

The documentary reflects the spirit of the women in the Group: inspiring, funny and full of hope, despite the hard subject matter. Produced by a small crew, the film provides intimate insights as the filmmakers respond to the unpredictable movements of the women's lives and to emergencies as they occur.

When the women invite Kerri-Anne Kennerley to Alice Springs, the film reveals the generosity and patience of their work in embracing the education of mainstream Australia. Family and domestic violence doesn't discriminate and neither do the Tangentyere Women's Family Safety Group. The group is bipartisan and non-political. Their lobby trip to Canberra is hosted by Malarndirri McCarthy, a Labor member of parliament, but they impressed all politicians they met, regardless of party affiliation. As Liberal MP, Lucy Wicks, says in the film, "As a non-Aboriginal person I just want to say, you actually really empowered me as well."

The director and co-writer of the film, Shirleen Campbell, a Central Australian Arrernte-Luritja-Warlpiri-Anmatyerre woman who has worked as a leading figure in the Group since 2015. The honesty of the film reflects her closeness to the subject. It is a film about violence, without representing any violence. But it is much more a film about the transformational healing power of this group of women, the support they give each other and their communities, their humour and ultimate hope for the future.