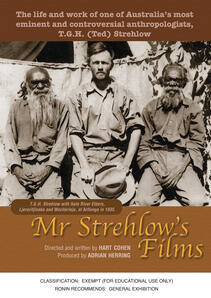 T.G.H. (Ted) Strehlow was one of Australia's most eminent and controversial anthropologists. This fascinating documentary traces his life from his childhood at Hermannsburg as the son of Lutheran missionaries to his days as a patrol officer and translator in Central Australia, and to his death in 1978.

Growing up on the mission with Aboriginal people in the early 1900s, Ted Strehlow spoke the Arrernte language fluently. In later years, he would be driven by a profound desire to preserve Aboriginal language and culture. The film and sound recordings he made of Aboriginal cultural practices are among the most extensive of any ethnographic filmmaker this century.

This extraordinary archive became the subject of much controversy. While giving us a glimpse of the unrestricted material in this collection, Mr Strehlow's Films explores some of the complex issues surrounding ownership and access through a range of interviews with historians, museum curators and filmmakers, as well as Aboriginal people directly connected to the Strehlow legacy. Punctuating this discussion is the personal story of Strehlow himself and his claim to an Aboriginal identity.

Produced in association with SBS Independent. Financed by the Australian Film Finance Corporation, with the assistance of the University of Western Sydney.