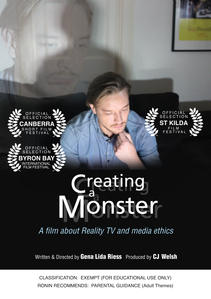 This documentary by Gena Lida Riess explores the ethics of reality television, how it is constructed and consumed, and the psychological impact it has on participants.

The film examines how the characters of people on reality television shows are simplified to serve the program's needs and narratives. Further, it questions whether our consumption of reality television negatively affects the lives of the participants in these programs.

On the surface Creating a Monster is about reality television. However, sub-textually the film confronts a bigger ethical question about the psychological impact on the contestants: is the fault placed on reality television producers or the audience who consumes the product?

"There is a dearth of films that manage to get behind the gloss and glamour of shows like 'The Bachelor' etc. Creating a Monster does just that. It is a terrific and moving exploration of how participating in 'Reality TV' can affect individuals, especially when they feel misrepresented. As someone concerned with media ethics and non-fiction filmmaking I found myself quoting this film in my PhD thesis, such is its contribution."

"Creating a Monster is a must watch documentary. The film serves as a strong educational resource for students of media, drama, English and psychology, offering a fascinating insight into the machinations of this incredibly constructed medium. All too often, viewers get sucked into these shows, forgetting that producers cast real people in traditional stereotypical roles, from the villain to the beauty to the bitch to the girl next door. Once the show ends, the characters reputation lives on in the public's consciousness, yet the reality stars lives are forever transformed by a reputation that far often precedes them. Creating a Monster is a poignant reminder about how much power the producers and networks have in crafting what we think and feel about someone, no matter what cost it may have on their personal lives."

I have, for a while now, had an obsession with reality television. I used to be ashamed of it, but now I embrace it whole-heartedly. When people would ask me, 'why do you watch that shit?', I would at first just shrug with embarrassment. But over time I have started to actually think about the question – why do I watch reality television?

I've come to a preliminary conclusion that the fact or the illusion that this is really happening and that these people are real people adds to the joy of watching. This leads me to a bigger question: not only why do we watch reality television but why do we like to watch people in general? What is the fascination with the idea of it being real?

I know, in fact, that it isn't totally real and that it, like other shows, has been con- structed to play out a narrative. The people are, of course, real people, but are they playing themselves or a role? Or is the audience's need for drama that imposes roles on the cast members?