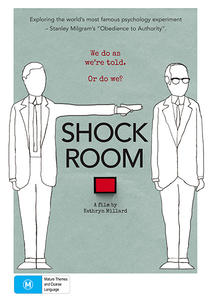 Shock Room breaks open Stanley Milgram's dramatic 'Obedience to Authority' experiment in the early 1960s, and forces us to re-evaluate its conclusions.

In the wake of the Holocaust, Milgram wanted to understand why people inflict harm on others. In 1962, he staged his experiment. Under the guise of participating in a study on memory and learning, participants were asked to inflict apparently lethal shocks on a fellow human being. Milgram later famously claimed that 65% of us will blindly follow orders.

My Lai, Rwanda, Enron, Abu Graib, the Deep Horizon Oil Spill, the News of the World phone hacking – 'I was only following orders' is a defence threaded through history.

But extensive research from Sydney filmmaker and self-professed Milgram obsessive, Kathryn Millard, reveals that although Milgram ran more than 25 versions of his experiment, he filmed only one. Overall, the majority of people actually resisted the orders of the Authority figure.

In Shock Room, Millard contends that while Milgram's experiment is a rich source of insights about the conditions under which people not only obey but also resist the dictates of their conscience, Milgram's experiment was as much drama as laboratory study. Milgram himself described his experiments as a fusion of art and science.

Fifty years after Milgram's original experiments, Millard, with a team of filmmakers and psychologists, re-staged Milgram's experiments in Sydney, with actors an intense immersive technique. Shock Room combines dramatisations, animation, archival film and interviews with psychologists, Alex Haslam and Steve Reicher. It provides new insights about how and why people refuse to inflict harm, and questions the conclusions of the world's most famous psychology experiment.

Shock Room turns a light on the dark side of human behavior and forces us to ask ourselves: what would I do?