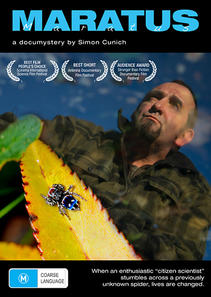 MARATUS is a delightful and good-humoured story of the experiences of an enthusiastic "citizen scientist".

One weekend, when bushwalking in the Namadgi National Park near Canberra, Stuart Harris, a spider enthusiast who is a garbage collector by day, unwittingly photographs an exquisite spider that is unknown to science. From his photograph, scientist Dr Jurgen Otto identifies the tiny and colourful spider as a "new" member of the Maratus genus: a Peacock Spider.

Together, the citizen enthusiast and the scientist set out on an epic three-year quest to find the spider again so that it can be studied. The spider is eventually named Maratus Harrisi in honour of its finder.

Filmmaker Simon Cunich creates an arresting story of determination, self-discovery and the power of citizen science to reveal nature's most extraordinary and hidden wonders.

"Maratus is a very accomplished piece of filmmaking and storytelling. On one level it first appears a simple but fascinating story about the discovery of a remarkable new spider, but it develops into a much more profound story of a man who also discovers meaning in his life. The film is microscopic in its subject but universal in its themes." - Judges' comments, Antenna Film Festival.