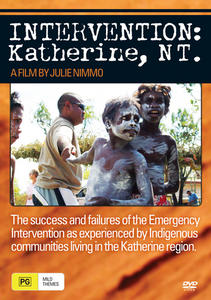 Produced by award-winning film maker Tom Zubrycki, (with ABC's David Jowsey as Commissioning Editor) and written and directed by Julie Nimmo, The Intervention was shot over a an 8-month period and features the lives of ordinary community residents as they experience the Intervention first hand, as well as the various government and business workers who all come together to implement it.

Despite the conflict and the misunderstanding along the way, what really shines through are the good intentions of the individuals involved. Outcomes can be judged at the end of the film with the benefit of hindsight, but the hopes of everyone was to make the world a better place for Indigenous children.

It all started when politicians in Canberra tried to deal with sexual abuse in remote Aboriginal communities. The gulf between the two worlds could not have been wider. The Government sent in the Army, the Federal Police and Doctors to begin "stabilising" virtually every single Aboriginal community in the Territory.

When the film-makers travelled into the Territory it was with an expectation they would witness lawless communities with frightened, abused children and adults ranging from neglectful to paedophilic. What they actually witnessed were primarily relaxed communities, burdened by poverty and a lack of inspiring opportunities, but on the whole they were happy, loving places. Children smiled and played, and the adults all declared "they were not abusers".

Frustrated with politicians and bureaucrats, and fatigued by the problems associated with poverty and disempowerment, they all share a singular dream: they all want to live in a healthy community, where all children are treasured, educated, and valued, and where adults live happily without slow suicide by grog.

By late June 2008, the anniversary of the Intervention, the filmmakers posed the questions: what new evidence of sexual abuse has been uncovered; how is life better for children and their parents in these remote communities; and what did the Intervention deliver?

"An insightful, if dispiriting, vision of the bureaucratic dysfunction, endemic poverty and alcoholism that still plagues parts of central Australia and how the Intervention, despite some improvements, made some people's difficult lives even more so. The film poses the question of whether the Intervention was really worth it, given so few convictions for sexual abuse have been recorded. Decide for yourself." - The Guide, Sydney Morning Herald.