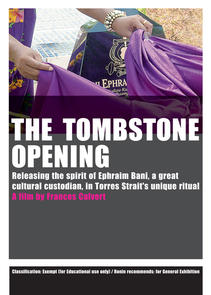 "Touching and informative ... a fine, accessible production that clearly illustrates the coexistence of the past and present, the traditional and the modern, the indigenous and the introduced ... It should convince students that Indigenous people still exist and continue to be themselves, even when they accept modern and foreign practices such as linguistics, cultural centers, and Christian burials."

The Torres Strait Islanders are Australia's 'other' Indigenous minority, Melanesians living on islands north of Cape York and now scattered all across Australia.

This is a culture rich in customs, myth and legends. The Tombstone Opening is a joyous ceremony performed years after the funeral to release the spirit of the deceased. Also called an Unveiling, it has nothing to do with exhumation, but refers to the moment when the last veil is unsheathed from the tombstone for everyone to see for the first time.

Frances Calvert, long-time friend and film-maker to Torres Strait, returned to Thursday Island at the request of the family of Ephraim Bani, protagonist of her award-winning film 'Cracks in the Mask', to record this unique if costly ceremony. Lyrically narrated by Ephraim Bani's grandson, the film explains and contextualises the ceremonies, protocols and songs for an outside audience. The film explores traditional obligations, attitudes to death and hopes for Torres Strait culture to survive in modern, secular Australia.

Extras include features on: