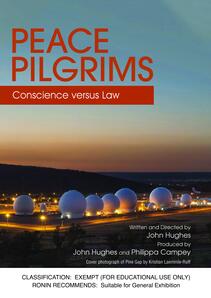 In September 2016, five "Peace Pilgrims" trekked overnight through the central Australian bush into the secretive military facility of Pine Gap, 18 kms east of Alice Springs. Their plan of action was to "pray for a miracle".

They were arrested about an hour before sunrise. Margaret Pestorius, Jim Dowling, Jim's son Franz, Timothy Webb and Andy Paine were charged under the Defence (Special Undertakings) Act, a law originally designed to protect the British atom bomb tests on Montebello Island, Emu Fields and Maralinga in the 1950s. They faced 7 years jail.

In court before Federal Court Judge, John Reeves - himself once a member of an anti-base group, Concerned Citizens of Alice Springs - the accused argued that they had to act urgently to prevent war crimes conducted by those in charge of the base.

In his advice to the jury, Justice Reeves remarked, "You will probably be left with no doubt about the sincerity of the beliefs held by the accused and the strength with which they hold them. Nevertheless, those beliefs ... do not override their obligations as citizens."

The jury took little time in finding the Peace Pilgrims guilty, and the Crown prosecution demanded they serve time in jail. When Justice Reeves instead imposed fines, the Brisbane courthouse erupted in cheers from the Pilgrims' supporters.