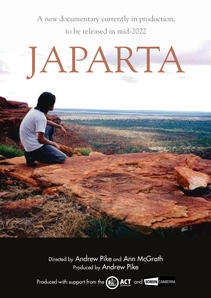 A NEW DOCUMENTARY IN PROGRESS, TO BE RELEASED IN MID-2022

In 1966, 200 Gurindji workers on the Wave Hill cattle station in the Northern Territory, walked off in protest against their conditions. The strike, which lasted 7 years, developed into a landmark event in the fight for Aboriginal land rights.

The story of the "Wave Hill Walk-off" came to the attention of a brilliant young economics student in Japan who was inspired to try to find a way of studying Gurindji history and culture. Our film is the story of this student, Minoru Hokari, and the spiritual connection that developed between him and the Gurindji. It's a story of spiritual transformation, and how he was, in Gurindji terms, "called" by the land to help the Gurindji tell their story to an international audience.

"Japarta" was the "skin name" given by the Gurindji to Minoru. He eventually spent many months living with the Gurindji, studying with Elders and writing an influential book (in Japanese) about Gurindji understanding of history. Before his untimely death in 2004 from cancer, at the age of only 33, Minoru also completed his PhD on the Gurindji at the Australian National University.

For Minoru, working with the Gurindji gave new meaning to his life. He gradually came to an understanding through his involvement with Gurindji Elders, of the importance of being in Country, to be aware and to feel Country, to be open to what Country will tell you if you listen. He wrote: "The art of knowing is ... often the way of paying attention. ... Use your senses to receive information from the world. ... For the Gurindji people history is not a subject that you 'choose' to learn. Instead history is happening everywhere in their everyday life. ... History should be listened to, seen and felt around yourself in your everyday life ... History is something your body can sense, remember and practice."

This film is a reflection of the progress of Minoru's work in the wider world. His book has now been published in English as Gurindji Journey (by UNSW Press) and exhibitions of his photographs of Gurindji country and culture have been presented in Japan and Australia. His writings continue to have impact and relevance in academic circles today.

The film is the work of two historians who previously made the award-winning MESSAGE FROM MUNGO, and are working on the new film with the approval of Gurindji Elders and Minoru's family.

Tax-deductible donations may be made via the website of the Documentary Australia Foundation: documentaryaustralia.com.au/project/japarta/

Produced with support from the ACT Government and ScreenCanberra.