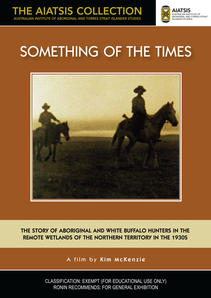 Using a wealth of archival photographs, this documentary reconstructs the life of buffalo hunters in the remote wetlands of the Northern Territory in the 1930s – both the white hunters and the Aboriginal labour that supported their operations.

Tom Cole was one of the hunters, now retired in Sydney. With the filmmakers, he visits the sites of hunting camps that he had built before the war in what is now Kakadu National Park. He reminisces on the old buffalo trade and meets some of the Aboriginal men and women who still live in the area who worked for him and on whom he was dependent.

He also visits Victoria Settlement (Port Essington): one of "the most heroic and hopeless" ventures in the history of the British Empire, established in the 1830s, now in ruins, where buffalo were first introduced.

For the film, Tom and his former Aboriginal team build a new camp in the way they did in the 1930s, and demonstrate the skinning of buffalos, the washing of the hides, and salting and drying.

Hunting was on horse-back in those days, unlike the present-day hunting by helicopter, and "Yellow Charlie" Whittaker was one of the great horse-back hunters. With other veterans, he comments on the tough life of the camps, when conditions were extremely rough and when they were often paid with food, tobacco and other commodities.

The hunters remember the wartime bombing of Darwin and the explosion in buffalo numbers when hunting was abandoned during the war. Nowadays, the buffalo is being eradicated from Kakadu, and rangers such as Dave Lindner, Environmental Manager for the Gagudju Association of traditional owners, explain the modern methods of control.