FULL CIRCLE [from the AIATSIS Collection] 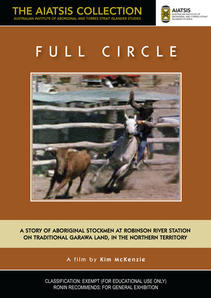 This beautifully photographed portrait of the life of Aboriginal cattle men in the Northern Territory was filmed at Robinson River Station in 1986.

The station today is owned by the Aboriginal community, providing a base for the community's future. Elder stockmen at the station such as "Ten Dollar" Don Rory and Johnson Charlie talk about their past experiences with white settlers and the community memory of Aboriginal people being shot by white men. From this violent beginning, the Aboriginal men came to work for the white station owners – sometimes trading labour for food. As one says, it was "just like slaving, working for bread and beef".

The station is on Garawa land and today the Garawa men have a strong identity as "number one" cattle men. Against the background of the annual muster, their stories are woven together to give a rich portrait of their way of life, their pride in their work and their close connection to Garawa country and Garawa culture.

The annual Borroloola rodeo is another place for their skills with horses and cattle to be displayed. The excitement of the rodeo and the rough riding contests is strikingly captured by the filmmakers.

English and Garawa language (some subtitles)