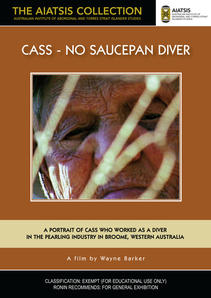 Broome, Western Australia, 1982: Cass recalls the old days of the pearling industry when there would be 40 or more boats operating from Broome. Now there are only 5 or 6.

Cass is a staunchly self-reliant man, part-Aboriginal, part-Malay, part-Scottish, who used to work as a diver in the pearling industry. He reflects on his life in the polyglot culture of the coastal north-west of Australia in the early decades of the century. He grew up in Broome, went to a convent school and experienced racial discrimination: it was hard to get work, and he was barred from town during some hours of the day, and had to sit separately in the picture theatre.

Today, many tourists come to Broome but "are not told the truth." People like Cass were told by white people not to say bad things about the town.

Cass visits the local cemetery and sees the stones marking the graves of a lot of his old friends. Only a few old-timers remain. They all worked in the pearling industry despite the hard conditions and the dangers of the 'bends", and problems with whales and other dangerous fish.

This intimate portrait was made by Cass's grandson, filmmaker Wayne Barker, when Barker was a trainee in the Film Unit of the Australian Institute of Aboriginal Studies.

With thanks to Kim McKenzie, Michael Leigh, Rev. John Flynn and Film Australia.