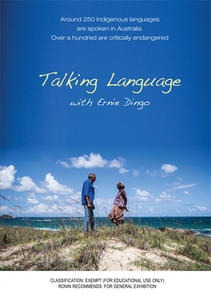 WINNER! 2015 AWARD FOR BEST CINEMATOGRAPHY (Documentary) for Dylan McDonald for his work on TALKING LANGUAGE, in the 44th National ACS Awards for Cinematography!

Around 250 Indigenous languages with 600 dialects are spoken in Australia. Today it is estimated that 30 of those languages are still strong and are spoken daily. But over a hundred are critically endangered.

In this series, Ernie Dingo explores the revival, maintenance and creation of languages which are in a constant state of change. He reveals the complex balance between language and relationship to country, and discovers how this balance has been affected since European colonisation.

Ernie's quest reveals a diversity of language that has a direct connection to how Aboriginal people listen, understand and speak to country. In return, the country speaks to them. In each episode, there is an important question that Ernie asks each person that he visits - what is the future of Aboriginal languages in their community?

Episode 1 Ernie Dingo learns about the unique language, stories and artwork of the Yolngu people of tropical Yirrkala in North East Arnhem Land.

Episode 2 Ernie Dingo experiences first-hand the legacy of colonial impact and environmental change on the Ngarrindjeri language in the Coorong region of South Australia.

Episode 3 Ernie Dingo explores the significance of Aboriginal language revival in the country of the Gunditjmara people of Victoria's Western Districts.

Episode 4 Ernie Dingo discovers the importance of teaching both Non-Indigenous and Indigenous children the Arrernte language in Alice Springs, in central Australia.

Episode 5 Ernie Dingo reveals the impact of mining on the language and lore of the Yindjibarndi people in Roebourne, Western Australia, and how they are preserving that knowledge for future generations.

Episode 6 Ernie Dingo spends time with 'proper bush gentleman', Bill Harney, who shows him ancient traditions connecting the Wardaman language in the Northern Territory with the law of the land and the night sky.

The crew filming Ernie and Tom Trevorrow on the banks of the Currong.
download high-res

Tom and Ernie having a yarn on the dry sands of Lake Currong.
download high-res

Vicki and Ernie looking out to Deen Marr.
download high-res