SAMMY BUTCHER: Out of the Shadows [from the CAAMA Collection] 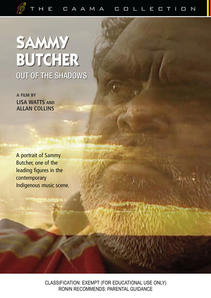 Sammy Butcher is renowned as one of the best guitarists in central Australia and one of the leading figures in the Indigenous music scene. Self-taught from the age of 10, Sammy went on to become one of the founders of the famous Warumpi Band, and toured extensively and made many recordings.

This portrait of Sammy shows his life in Papunya, 250kms west of Alice Springs, where he grew up and still lives. In an intimate interview, Sammy talks about his life in the Warumpi Band, and his aspiration to use his music to help his people achieve a better life: "Songs talk to the people ... Warumpi brought all of the people together."

In particular, the film shows Sammy's work with young groups such as the Little Orphan Band, teaching kids and teenagers in the Papunya community to make music, and in the process introducing them to celebrities like Peter Garrett and Russell Crowe.

The film also follows Sammy on his emotional first visit to the home-land of his forefathers – Pikilyi, some 400km north-west of Alice Springs, now a cattle station. Accompanied by men from the area, Sammy is able to experience the beauty and richness of his father's land.