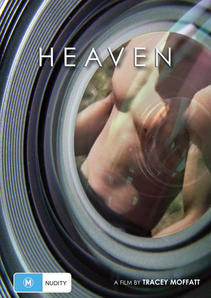 Heaven aims to provoke. Shot in the style of an amateur vacation movie, this video takes on one of the icons of Australian culture (which, in addition, belongs to a world that is almost exclusively male), the surfer. On a beach and its surroundings, with the rhythm of the soundtrack alternating between crashing waves and singing men, Moffatt hunts down with the lens of her camera various surfers as they get ready to practice their sport.

The piece opens on images of surfers changing their clothes, filmed on the sly. Coolly, our unabashed filmmaker examines these bodies of men dressing and undressing. Her cheeky peeping-Tom style takes on a flirtatious appearance. She pesters them, comes on to them. The surfers respond to her with a blend of thoroughly macho rudeness and vexation, both amazed and flattered by her impudence. Meanwhile, Moffatt has a rollicking good time.

The unquestionable success of this stylistic exercise springs from the ambivalence of the feelings the film engenders, i.e., a certain pleasure in having a look and a certain discomfort with this voyeuristic process, commonly associated with the behavior of men.

"A playful video that glories in the female gaze and objectification of men. It zeros in on the Australian national sport, surfing, and in particular on several dozen good-looking muscular men changing into or out of their swimming trunks. This ritual is usually conducted in parking lots or on sidewalks, always near cars and somtimes inside them; it usually but not always involves a beach towel wound carefully around the torso. Ms Moffatt begins by shooting her subject unseen from inside a house and gradually moves closer and closer, engaging some in conversations that are never heard. The soundtrack alternates between the ocean surf and the sounds of drumming and chanting, male rituals of another, more authentic Australian culture. By the tape's end, the artist's voyeurism has shifted to participation; the camera shows her free hand, the one not holding the camera, darting into view, trying to undo the towel of the last surfer." - New York Times.