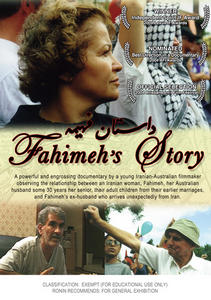 Fahimeh's Story is an observational documentary about a vivacious 47 year old Iranian woman who migrated with her children to Australia after fleeing an unhappy, arranged marriage to a husband who she could not divorce under Iranian law.

Five years on she has fallen in love with and married John, a 77 year old Australian ex-army officer and RSL member.

John is now converting to Islam in order to better relate to his young wife.

Both John's and Fahimeh's children are unhappy about the marriage.

A few months later, Hossain, the Iranian ex-husband, arrives in Australia looking forward to seeing his wife and family again.

He does not know his wife has remarried....

"A triumph" - Evan Williams, The Australian.