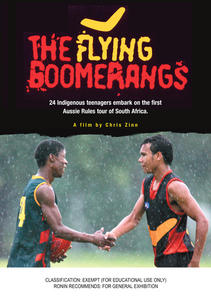 THE FLYING BOOMERANGS follows a team of outstanding young Indigenous football players who travelled to South Africa to play a series of competitive games. The trip was part of the AFL's plan to expand the game into other countries and make it a more international sport. In the process, the young Indigenous squad learnt important lessons about culture, justice and themselves as young leaders.

The film documents the adventures and insights of these 24 Indigenous teenagers as they embark on the first Aussie Rules tour of South Africa. Drawn from Aboriginal communities and families around the country the young players spent two weeks in South Africa playing in the republic's emerging AFL competition and visiting landmarks such as Soweto and the Robben Island prison.

THE FLYING BOOMERANGS is a personal development and leadership program incorporating a match series against developing countries (not only South Africa but also Papua New Guinea and Tonga). The participants are 14 -15 years of age and were selected from the AFL KickStart Camp, conducted in Sydney. After the tour, the Boomerangs returned to Sydney to continue their leadership development with AFL players during the AFLPA Indigenous Player Camp.