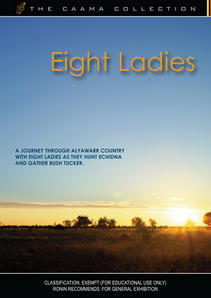 The eight ladies in this film come from Alyawarr Country in the Sandover River region in central Australia, about 250km north of Alice Springs. The filmmakers joined them on a five-day journey into the bush to hunt echidna and gather bush foods such as the bush potato. As they hunt and gather, and as they sit around their campfire at night preparing the food, they talk about the old days and how life has changed.

Filmed in observational style, this gentle and reflective film is a moving revelation of the women's sense of relaxed oneness with their Country and their sense of maintaining a lifestyle from the old days before white man came.

Looking for animal tracks, working together to dig out an echidna from underneath an ant hill, finding bush potatoes, and then cooking their food – all of these activities build a rich and visually beautiful portrait of a way of life and of eight women who share the work and the rewards.

EIGHT LADIES is a delightful film by Dena Curtis who has edited many CAAMA documentaries, and all too rarely makes her own films.