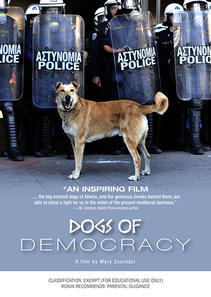 "With Greece in seemingly permanent crisis, this modest but highly enjoyable documentary from Australian filmmaker Mary Zournazi does for the dogs of Athens what the recent Kedi did for the cats of Istanbul – that is, treat them as a symbol of everyday vitality that persists no matter what. Be prepared for some tearjerking moments." - Jake Wilson, Sydney Morning Herald

"AN INSPIRING FILM ... the big-hearted dogs of Athens, and the generous Greeks behind them, are able to shine a light for us in the midst of the present neoliberal darkness." – J.M. Coetzee, Nobel-Prize-winning author.

Dogs of Democracy is a documentary about the stray dogs of Athens and the people who take care of them. Author and first-time filmmaker Mary Zournazi explores life on the streets through the eyes of the dogs and the experiences of Greek citizens.

For Zournazi, Greece has become 'the stray dog of Europe': the dogs have become a symbol of hope for the people and for the anti-austerity movement. Filmed in Athens, the birthplace of democracy, the documentary offers a universal story about love and loyalty and what we might learn from animals.

Coming from a Greek family living in Australia, Mary Zournazi made her first visit to Athens in 2014. She is the author of several books including Hope - New philosophies for change and Inventing Peace with the German filmmaker Wim Wenders. She teaches in the sociology program at the University of New South Wales.

I made my film Dogs of Democracy almost by accident. I took my first ever trip to Athens in October, 2014. I had gone for a holiday and in search of my cultural roots. But I had arrived in the middle of the Greek economic crisis. I could feel the tension on the streets, but walking around the city, I also noticed something else, something expected and unique. All round the city there were stray dogs, they seemed to occupy the city like 'citizens' – they crossed the traffic lights, they socialized, they were part of the urban life and feel of the city. Immediately I fell in love with them, and I became curious about their 'lives'. In a very short time, I realized that the dogs were looked after by volunteers in Athens, who cared for and fed the stray dogs. I became fascinated by how in the middle of Greece's worst economic crisis people were willing to take such care of the animals. I began to consider what this might say about our ideas of love, community and care. That's how the story began: a love of the animals, and the love of the city and its people

The film also took somewhat unexpected turns: I travelled to the island of Lesvos and documented not only the economic crisis but also aspects of the migrant crisis as it unfolded in Greece. The film is a story about the stray dogs of Athens, but it is equally a story about peoples' courage and dignity in times of crisis. The film is my love letter to Greece: to its people and to its stray animals.

"A powerful film ... the stray dogs of central Athens are transformed from mere symbols of a peculiar freedom to witnesses of a heart-wrenching human crisis." - Yanis Varoufakis, Greek economist and politician.

"A terrific film. It weaves the story of the dogs through Greece's recent political history, and more importantly, a sense of the joys of struggle." -  Professor Michael Hardt , political philosopher, Duke University.

"Mary Zournazi's Dogs of Democracy is a powerful look at the human impact of the Greek economic crisis. Zournazi eschews the normal approach to this kind of material, uses the plight of Athen's stray dog population as a metaphor for the struggles and hopes of the Greek people. Through the peoples' treatment of these dogs, the film also functions as a hopeful study of the human potential for kindness, even under great economic strain. It's no surprise that Dogs of Democracy counts Nobel Prize-winning author JM Coetzee among its fans".
- James Curnow, Curnblog Reviews

"I watched Dogs of Democracy with absolute fascination! It is one of the best films ever done about dogs and that is saying a lot, because there are a lot of them! It not only will warm your heart for dogs, but also for Greece and the wonderful people there who are suffering unbearably, and nonetheless find time to give food (and even more important, love) to the Greek street dogs who seem to understand only too well what is happening. Now if only every politician in the EU could watch this and learn to be more like dogs (and more like the compassionate Greeks too!)."

'Mary Zournazi's Dogs of Democracy skilfully uses visual metaphors and unexpected twists to explore the culture of contemporary Greece. Her film begins by acquainting us with the stray dogs of Athens. We see them fed irregularly by various persons, including Greeks who are themselves being fed by social agencies. ... The dogs are seen wandering about, visible yet "not seen." ... In a very subtle manner the images of the stray dogs and their experiences merge with the lives of Athenians struggling through the (economic) crisis. The camera doesn't plead for them or depict them as helpless. It just shows the prevailing patterns of everyday life. Midway through the film a middle-aged man states, "We are the stray dogs of Europe." In short, Greece is visible to Europe, but "not seen." ...

'While Dogs of Democracy has many dark moments, it illuminates the resilience of the Greek character and leaves a hope that Greeks will indeed ultimately find their way out of this crisis. If they are indeed Europe's dogs of democracy, they also have the spirit of Loukanikos.'