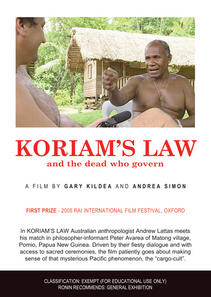 Koriam's Law is an award-winning documentary about a culture's need to control the ideas that define it.

This award-winning documentary by one of the key figures in international ethnographic film, focusses specifically on the rites and understandings of a popular religious and social movement in Papua New Guinea.

The Pomio Kivung movement was founded in 1964 by the late Michael Koriam Urekit, in the beautiful Jacquinot Bay area of PNG's East New Britain province.

The movement's leaders are keen to show that it has nothing to do with 'waiting for cargo'. Over the years, Kivung thinkers have scrutinised the revelations of missionaries for hidden codes and truths.

They have examined, too, forms of colonial governance - especially money and bureaucracy - for clues to the source of white man's formidable power. Koriam's central question was how to find a way back from the ancient problems that put his people in a state of subjugation.

The Kivung movement incorporated and localised parts of Christianity whilst seeking an ever closer embrace of the beloved dead - inducing and imploring ancestral spirits to help them overcome the deprivations and humiliations of racial inequality. In the meantime, the twin organs of white power, Mission and Government, needed to be carefully kept on side.

In the face of official condemnation, the Kivung's political and religious philosophy seeks to uncover that secret path to a perfect existence which whites seemed to have found but, ever since, have selfishly monopolised.

"Koriam's Law - and the dead who govern is a film of absolutely extraordinary strengths. It moves in a very wide range of intellectual and artistic fields ... most interesting is the way it's prepared to engage with complexity, not afraid of the difficult debate. And it's a film that's really a film: wonderful camerawork and very clever editing ... an amazing achievement, we were all gripped by it throughout." - RAI FILM FESTIVAL JURY, OXFORD, SEPTEMBER 2005.