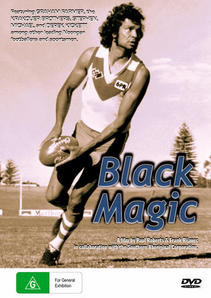 Although about top Aboriginal sportsmen, BLACK MAGIC is more than a film about sport. It is an account of the creative use of sport made by the Noongar people of Western Australia's south-west to advance their people's standing.

Denied access to other areas of social life like most Aboriginal communities at the time, the Noongars, from as early as 1920, channelled the natural talent of their young people into the arena of competitive sport, notably running, boxing and football. Competitive sport, as filmmaker Paul Roberts notes, is 'an open gate, a universal rite of passage, an opportunity to achieve recognition and acceptance.'

Although football was a segregated sport up until the 1930s [the right to attend school and to vote were many years way], boxing and foot-racing at country shows were open to all. Beaufort Dinah, 'King of the Blackfellows', and Ernie Cockie became champion fighters, with the former becoming WA State Champion in the 1920s.

Like show tent boxing, professional foot-racing was an integral part of country shows up until the advent of television in the late 1950s. Stakes were high at these 'gifts', as race finals were called, and Noongars often won. Archie Jones, a brilliant runner, was undefeated until his promoter, betting against Jones, drugged him in WA's richest country race, the York Gift. Demoralised, Archive Jones returned to the reserve.

In national football, the Hayward Brothers broke into the WA league in the 1930s, about the same time Doug Nicolls pioneered Aboriginal involvement in the Victorian Football League. They were followed by Graham Farmer and Ted Kilmurray [1950s] to more current players such as Nicky Winmar, Jim and Phillip Krakouer and Derek Kickett, all considered to be top sportsmen. Graham Farmer is regarded by most experts as among the two or three greatest footballers of all time.

Through the narrative of these sportsmen, their relatives and friends, the film establishes that the motivation to succeed in sport arises from a more general desire to be accepted and recognised. The close kinship bonds that link Noongar families, the quality of interaction between the generations, and an Aboriginal value system that Noongars would like others to understand and share are revealed through personal stories told with pathos and wry humour.

The background music and artwork in the film have been produced from within the community, creating a rich, cohesive picture of Noongar life and culture.