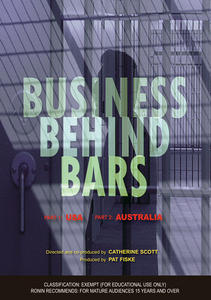 Part One is about business behind bars in the United States. The film's main focus is on the jailers and the glitzy commercial arena of the prison industry. This is contrasted with the world of their captives living out their confined lives on the inside. How do these parallel and opposing universe affect each other? What happens to justice in a market driven climate where money is made out of deprivation of liberty.

Australia has the highest proportion in the world of inmates in private prisons. These facilities are financed, built, managed and owned by US and UK corporations. Part Two questions prison management and accountability, and reveals the personal struggles of inmates and former prisoners: deaths in custody, self-harm, riots, surviving after release. Issues of law and order and mandatory sentencing confront us daily. Is the combination of a private prison industry and harsher sentencing polices the way to go?

"We're dealing in a situation where society as a whole is clamouring for a so-called get tough on crime approach, locking up more and more people for longer and longer periods of time and that inevitably has an effect on the kinds of conditions people are locked up in." - Jennifer Gainsborough (American Civil Liberties Union).

"The private prison industry is based on prisoners, it's continued and growing profits is based on prison growth. In order to do this, we need sufficient enough raw material. What's frightening in this case, the raw material is people." - Stephen Donziger [editor 'The Real War on Crime'].