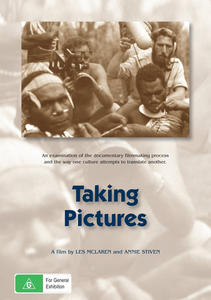 TAKING PICTURES is a thoughtful look at the way Western cameras have represented the lives of Papua New Guineans.

Before the 1970s, the Commonwealth Film Unit represented the people of PNG in a paternalistic way, as curiosities. The unit used pompous voice-overs telling viewers what they should believe. Les McLaren and Annie Stiven are two of a group of Australian filmmakers who have lived and worked in PNG during the past 25 years and who see their roles rather differently. Through their films, they have endeavoured to reflect Papua New Guineans' complexity of thought, language and culture, using a wide variety of filmic styles and techniques.

The film features interviews with a variety of Australian filmmakers who have worked extensively in PNG, including Bob Connolly and Robin Anderson, Chris Owen, Dennis O'Rourke and Gary Kildea. This documentary is a fascinating tracing of PNG culture and history from the 1930s until today.