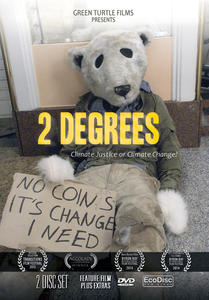 A 2-DVD set - The discs are Eco Discs, and the packaging is recycled cardboard.

As the world waits in hope for a new dawn on climate change, 2 DEGREES reveals the chaotic failure of the UN negotiations in Copenhagen. It becomes chillingly clear that we cannot wait for governments to lead the way. So if commitment to act won't come from above, perhaps the voices and actions of communities will bring the revolution that is needed. 2 DEGREES takes us to the streets of Port Augusta, a small Australian town, and follows the passionate efforts to replace the coal fired power stations with solar thermal power.

If we don't understand the lessons from Copenhagen, we are doomed to repeat them in 2015, when the world body meets once more in Paris to adopt a legally binding agreement. From the award‐winning producer of The Burning Season and The Man who Stole my Mother's Face, 2 DEGREES explores climate change through the prism of climate justice. While An Inconvenient Truth alerted us to the problem of climate change, 2 DEGREES is the gripping and vital fight for a solution.

"We hang on the knife edge of crisis, and as this film powerfully demonstrates, there are a lot of folks mobilizing to try and stave off the worst - and to build something beautiful in its place. Please join them!" - Bill McKibben 350.org

Reflections 5 years later by one of the filmmaking team, Jeff Canin:

In 2013, our documentary, 2 DEGREES, highlighted the successful campaign by the Australian Youth Climate Coalition and local residents to have the coal fired power station in Port Augusta converted to solar thermal power. The backdrop to this inspiring campaign was the Governments' failure at the Copenhagen Conference to take meaningful action to solve the Climate Crisis.

Five years later, the UN's IPCC Special Report, was hailed as a major advance over previous efforts to alert world leaders and citizens to the growing climate risk. But the report, dire as it is, missed a key point: self-reinforcing feedbacks and tipping points could cause the climate to destabilise even faster.

Continuing Government inaction has led to an upsurge of recent protests, inspired by Greta Thunberg, the 16-year-old Swedish student whose solo protest began in August 2018. Children walked out of schools in 2,233 cities and towns in 128 countries, with demonstrations held from Australia to India, the UK and the US. In London, Extinction Rebellion protesters occupied four sites across the capital and staged various acts of civil disobedience, being likened to the suffragettes and anti-apartheid activists.