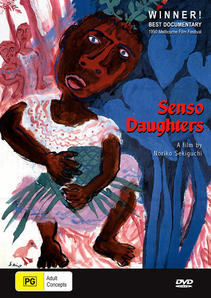 During World War II, 140,000 Japanese troops died in Papua New Guinea. Considered the 'Forgotten War,' neither the war nor its veterans received public recognition in Japan. Another unacknowledged tragedy of that campaign was the army's mistreatment of New Guinean women and 'comfort girls'. Over 90,000 'comfort girls' were shipped to battle sites as 'military commodities'.

SENSO DAUGHTERS focuses on the legacy of the Japanese occupation of Papua New Guinea during the Second World War. It is a legacy that arises from rape, starvation and terror. Sekiguchi's documentary lets the residents of Papua New Guinea, especially the women, tell the story of their three years under Japanese Army rule.

The women recount how the poorly supplied Japanese soldiers at first offered to trade for food and then demanded it at gunpoint, leaving them and their children on the verge of starvation.

It wasn't only food that the army wanted, despite a veteran's claims that Japanese soldiers would never have touched the 'dirty' local women. One survivor tells how she went with a Japanese officer after he threatened to kill her parents. She bore his son, but says she has never told him his father was Japanese, although he has suffered because of his lighter skin colour.

A former military nurse says it would have been worse for the local people if Japan hadn't taken its own prostitutes to the war zones. One of the veterans interviewed in the film claims that there were no such women in the South Pacific country. Sekiguchi, however, not only located the site of one brothel run by the Japanese military - the Rabaul Cosmopolitan Hotel - she found some Papua New Guineans who had worked there.

This is a compelling story which brings to life a little-known aspect of the War. It gives voice to the civilians who were forced to endure a living hell and ensures that their experiences will never be forgotten.

"Sekiguchi lived with the women of Papua New Guinea, following their lifestyle, for five years to gain their trust. She repaid that trust by creating a vehicle for them to tell their story in their own words, and A POWERFUL STORY it is." - Don Smith, The Japan Times.