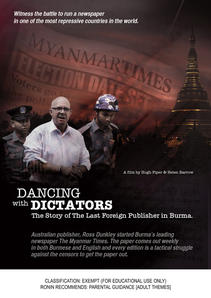 Ross Dunkley is a mix of pragmatism and idealism: he is a free speech warrior prepared to do business in a country dominated by the dead hand of the military dictatorship. Originally, influential liberals supported Dunkley's newspaper because they wanted reform but four years later a hardline crackdown saw his colleagues jailed and Dunkley hanging on by his finger nails.

Set against the background of the country's first election in 20 years, DANCING WITH DICTATORS is an observational documentary about Burma from the inside.Those outside the country see the election as a sham - for many inside the country, including the paper's journalists, this is an opportunity they cannot afford to turn their back on – a chance for a step towards democracy no matter how limited.

The film was made with considerable risk to the filmmakers and to the participants. The film-makers' presence during the election does not go unnoticed and four days after the vote they are deported, focussing attention on Dunkley. Shortly afterwards the hardliners strike again and Dunkley is arrested and charged with immigration offences linked to an alleged assault on a woman. He spends seven weeks in Burma's notorious Insein prison before being granted bail and appears in court over 20 times. Once free, he remains committed to regaining control of the newspaper and continuing the fight for freedom of speech in a country he has grown to love.

DVD includes a 30 minute interview with the director, Hugh Piper.

Follow this link to read the Sandra Hall's review in the SYDNEY MORNING HERALD 8/12/11 - www.smh.com.au/entertainment/movies/nononsense-account-of-editor-under-siege-in-burma-20111207-1oj1y.html

Follow this link to read THE AUSTRALIAN article on Dancing With Dictators -
www.theaustralian.com.au/news/arts/burmese-daze-finally-sees-the-light/story-e6frg8n6-1226215543139

Follow this link to read the SYDNEY MORNING HERALD article on Dancing With Dictators -
www.smh.com.au/world/a-crusade-for-asias-murdoch-20111203-1ocae.html