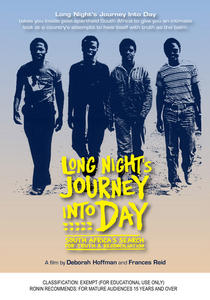 "This eye-opening look inside South Africa's 'Truth and Reconciliation Commission' is, by turns, poignant, shocking, poetic and always intelligent. But most important, the film's profoundly human depiction of the traumatic scars left by apartheid makes it required viewing for anyone who cares about what it means to be human.

The TRC was created to mediate between perpetrators of apartheid crimes who seek amnesty for their transgressions and the victims who seek justice (or more accurately, alas, the victims' surviving families). Full disclosure before the commission did not guarantee a confessor's amnesty, but the proceedings did make for a remarkable, open recounting of horrific historical events.

LONG NIGHT'S JOURNEY INTO DAY focuses on four case histories, which were heard over the course of two years. One black man faces the parents of a young Fulbright scholar from California whom he killed in a mob riot. A separate case concerns a white former security officer who has murdered an anti-apartheid activist. Yet another activist who has taken part in a car bombing that killed three white women faces the unforgiving sister of one of the victims. The fourth and most intriguing case involved a young black policeman who took part in the government-sanctioned killing of seven black youths deemed to be 'terrorists'.

At the heart of these matters is the sticky question of forgiveness. As the camera watches unflinchingly, murderers (who are relatively quick to apologise for their actions) face the families of slain victims, who sometimes aren't so quick to offer absolution. Tellingly, the tally doesn't cut neatly across racial lines. It's a grave reminder that what starts out as a black-and-white issue - literally or figuratively - must be reconceived as a more complex human one if progress is to be made. This film is a bold and moving step in that process."