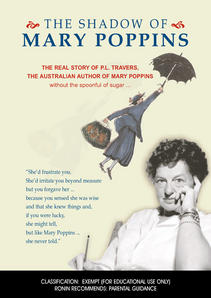 THE REAL STORY OF P.L. TRAVERS, THE AUSTRALIAN AUTHOR OF MARY POPPINS without the spoonful of sugar ... Pamela Travers was the creator of the universally-loved fictional character, Mary Poppins. Yet the whimsical fantasies of the sugar and spice nanny bore no resemblance to Travers' real life childhood. Her mother was suicidal and needy; her father, an alcoholic rogue who died when she was seven.

Pamela's imagination was her only refuge, a means of survival. And so, after virtually raising her two younger sisters she set about re-writing her life and the characters who populated it.

Re-invention became a theme for P.L. Travers. She spent her life seeking out astrologers in California, Buddhists in Japan, was a lifelong devotee to a Russian spiritualist, and even lived for a short time with Navajo Indians in New Mexico.

Away from the metaphysical however, her relationships were less successful. She fell in love with a serial adulterer and a string of disastrous men, just like her father. All that though, was about to change - Mary Poppins was going to Hollywood.

After twenty years of negotiations, she signed a lucrative deal with Walt Disney on what would turn out to be Disney's highest grossing film to date. Although never professing to be happy with the film, she lived comfortably on its royalties. Always a contradictory person, Pamela Travers wrote ten other works of fiction and hundreds of poems, articles and essays, but it was her fiction of a happy childhood that cast the greatest shadow in her life.

"She'd frustrate you. She'd irritate you beyond measure but you forgave her ... because you sensed she was wise and that she knew things and, if you were lucky, she might tell, but like Mary Poppins ... she never told."