IT'S A LONG ROAD BACK [from the AIATSIS Collection] 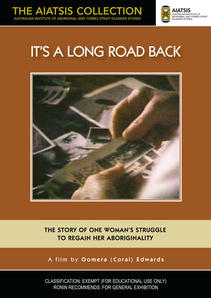 This powerful documentary was made by Oomera (Coral) Edwards on Super 8mm film as a training exercise at the (then) Australian Institute of Aboriginal Studies in Canberra.

The film surveys the New South Wales policy of taking Aboriginal children from their families and putting them in institutions run by the Aborigines Welfare Board. From 1883 to 1969, this policy deprived generations of children of their Aboriginal identity. Oomera was one of these children, and she discusses her own struggle to regain her Aboriginality.

The film also includes a moving interview with a former matron at an Aboriginal Welfare Home in Cootamundra, expressing her on-going concern that Aboriginal children were removed from their parents without any consultation or parental permission.

Oomera's personal journey and her work in helping other families to re-unite is a central part of a longer documentary, LINK-UP DIARY (1987), directed by David MacDougall, also in the AIATSIS collection.

A film by Oomera (Coral) Edwards
Sound by Wayne Barker