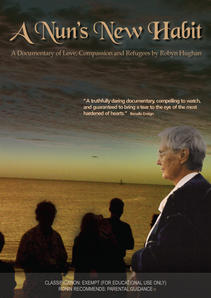 A Nun's New Habit follows the story of Sister Carmel Wauchope, a sister of the Good Samaritans who resides in the outback town of Whyalla, not far from the recently closed Baxter detention centre. Sister Carmel kicked off her habit some 20 years ago. However, her current habit, the plight of refugees who have been detained in the detention centre and the ongoing psychological damage and trauma suffered after their release is arguably just as profound.

Sister Carmel is a gem, and through her we learn the ongoing hardships the refugees face and how important it is to maintain a sense of love, compassion and humanity in today's world.....a world which often seems to be full of fundamentalism and hatred. For Sister Carmel, religious tolerance is of the utmost importance and her respect for the refugees and their Muslim faith is an inspiration. In return these young men openly adore her.

A Nun's New Habit is a fascinating profile of an ordinary religious sister with extraordinary compassion for some of the most marginalised people who have arrived on Australian shores today.

"A truthfully daring documentary, compelling to watch and guaranteed to bring a tear to the eye of the most hardened of hearts." - Benalla Ensign.

"A Nun's New Habit is a fascinating profile of an ordinary religious sister with extraordinary compassion for some of the most marginalised people in Australian society – refugees and asylum seekers. Your film would be an excellent educational tool for senior primary and secondary students in units of religious education, politics, social science, legal studies, ethics or religion and society. It is also a wonderful contribution to the promotion of religious life, where professed women and men, in the name of Christ and in the spirit of their founders, seek out the lost, poor and broken of our own day, and advocate on their behalf.  A Nun's New Habit gets behind the slogans and stereotypes of the immigration debate and religious life by presenting the humanity of the people involved." -  Rev Dr Richard Leonard SJ/ Director Catholic Television.

"Congratulations on a warm-hearted, yet serious film. You have done a great job in crafting a very human story that needs to be told and re-told. It is important to have such documentation to remind us now and remind us in the future about this grave injustice, but just as importantly, about how 'love conquers all'! Carmel's lack of pretension was infectious and real, a quality you managed beautifully to make the most of. If I can be of assistance in spreading the word about your production I would be very happy to do so. I wish you every success in the marketing of 'A Nun's New Habit'." - Peter Thomas, Vice President - SIGNIS World Catholic Association for Communication.

"A Nun's New Habit is in part a portrait of Sister Carmel who has been working with refugees incarcerated in Australia's detention centres. We come to know her through her friends and family, and importantly through interviews and illustration of her actions. The film notes that history repeats itself and that society seems always to need someone at the bottom. Cruelty and compassion are twin components after all in Australia's history. The film therefore works by keeping to a binary pattern of inspiration and degradation. 'Illegals' are deprived of their humanity and the 'processing' of them is scandalous. Defining individuals as illegals and as a threat to national security provides an excuse for indefinite detainment. It's not surprising that images of barbed wire feature frequently as reality and metaphor. Running through the film serving as its political and activist centre is the story of the infamous Baxter detention centre, which was closed in August 2007. We learn that more than 50 detainees were transferred to psychiatric hospitals and many of those released remain psychologically damaged. If the film charts the tragic human cost it also offers beauty and redemption in line with the spiritual life and outlook of Sister Carmel. Visiting the detention centre we overhear the comment "I notice you brought the roses" and "I know how much the men enjoy the beauty of them." At first it seems odd – quaint, irrelevant, indulgent even. Surely that man needs a lawyer, not a rose! But the film begins to win us over with seduction and kindness, with what Wordsworth called 'those little, nameless, unremembered acts of kindness and of love.' Flowers are a genuine comfort, and for one man supplied with almond blossoms by Sister Carmel, they are a comforting and a poignant reminder of home. A Nun's New Habit is a painfully elegant film with high production values and excellent cinematography. It's the spirit of beauty that triumphs over sad, selfish, humanity. The film will find a sympathetic echo in a variety of nations struggling to maintain, protect or defend their human rights against the authoritarian national security agenda." - Dr Ian McCormick, Director of the International Community Film Forum.