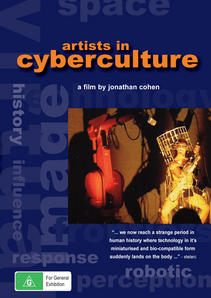 Through a series of interviews, performances and electronic theatre, ARTISTS IN CYBERCULTURE looks at ways in which the artists challenge the emerging technological realm known as 'Cyberculture'. It also examines issue such as gender, the body, the homogenisation of culture and the social and environmental implications of these new technologies.

Many of these artists are working at the cutting edge of these new technologies. Among the nineteen interviewed are:

Char Davies works with high end SoftImage 3D software. She uses different metaphors in her work such as earth, water, ground etc in such a way that her images resonate with an emotional and spiritual meaning.

Stelarc uses a data glove driven virtual arm [controlled using a gesture based command language], an industrial robot, lasers and images of his own internal organs in live performances to explore the relationship between the body and machine.

Myron Kreuger has been working with interactive technologies since 1973. He is a visionary whose work is essentially experiential - his primary concern is with the human-machine interface.

"... we now reach a strange period in human history where technology in it's miniaturised and bio-compatible form suddenly lands on the body ..." - stelarc.

"... an interactive experience where we can invent worlds and invent new kinds of experiences." - Myron Kreuger.