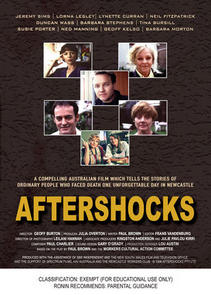 AFTERSHOCKS is a film examining the experiences of eleven people who were in the Newcastle Workers' Club at the time of a serious earthquake in December 1989. Neither a re-enactment nor a documentary, the film uses the words of these survivors, interspersed with TV news film, to construct a compelling examination of the impact of such an event on the people who were touched by it. The words of the eleven survivors featured in this film are spoken by actors, but there is a sense of immediacy and credibility that makes it difficult to believe that the speakers were not the actual participants in this drama.

At 10.28 on Thursday December 28th, 1989 an earthquake measuring 5.5 on the Richter scale shook the NSW coastal and port city of Newcastle for approximately ten seconds. The epicentre of the earthquake was just five kilometres west of the centre of Newcastle but its impact was felt as far away as Victoria and Queensland. The greatest damage occurred in central Newcastle and in the adjoining suburb of Hamilton. Shops, public buildings, hotels and even the Royal Newcastle Hospital all suffered extensive damage, but by far the scene of the greatest devastation and tragedy was the Newcastle Workers' Club.

On the day of the quake, Newcastle was crowded with holiday makers enjoying the break between Christmas and New Year. Thursday was pension day and a larger than usual number of visitors frequented the Workers' Club, playing the pokies or taking part in a game of Hoy (similar to Bingo). A crew was setting up for that evening's concert by Split Enz and Crowded House in the Club's auditorium.

In the ten seconds after the quake struck, the top two storeys of the Workers' Club collapsed and the west side of the building crumbled, trapping an estimated 50 people. By the end of the day some 40 people had been rescued from the Club but there were still bodies trapped in the rubble.

Ultimately 12 people died as a result of the earthquake (9 of them in the Workers' Club), 140 people were injured, 15 seriously, and the people of Newcastle faced a damage bill of $1.5 billion. Less measurable but no less significant was the social and psychological impact of this tragedy on the community. Nevertheless, there is a sense of pride and satisfaction at the way in which the people of Newcastle responded to the crisis.