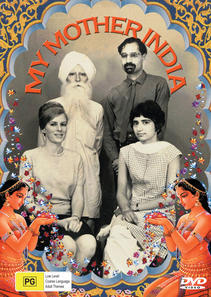 Director Safina Uberoi traces her parents' history. Her Australian mother married a Sikh and moved to India. There they bought up their three children and survived the anti-Sikh riots of 1984. The autobiography features family photos, historical footage and interviews with the family particularly with Uberoi's mother, Patricia.

It is no wonder that Safina Uberoi made a film about her family: She has an Indian father who collects kitch calendars, an Australian mother who hangs her knickers out to dry in front of the horrified Indian neighbours, a grandfather who was a self-styled Guru and a fiercely man-hating grandmother. What begins as a quirky and humorous documentary about an eccentric, multicultural upbringing unfolds into a complex commentary on the social, political and religious events of the anti-Sikh riots in 1984 which tore this family apart. This is a powerful tale of love and hate, exile and belonging, loss of identity and return to faith.

4 1/2 STARS "This marvellous film ...took me on a journey I'd never been on before, worlds opened up..." Margaret Pomeranz, SBS Movie Show.