CELSO AND CORA - A Manila Story 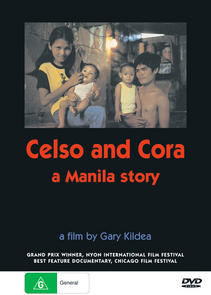 Cora and Celso make a living selling cigarettes at night outside a downtown hotel in defiance of City regulations.

The film follows their lives over a three-month period, beginning with Cora's attempt to find a new room for the family after they have been evicted from their previous home. Later, Celso and Cora face a crisis in their own relationship aggravated by the stresses of their daily life.

Without preaching or polemics, the film is keenly expressive of the filmmaker's empathy with Celso and Cora, as well as his awareness of the wider social and political forces that envelop them.

Australian independent filmmaker, Gary Kildea, spent several months living and filming in Celso and Cora's neighbourhood. Throughout the film, there is a remarkable sense of trust and an easy familiarity in the way in which the main characters communicate with the filmmakers. The resulting work is both personal and observational, presenting an aspect of Filipino life rarely treated in depth by the Western media.

"A vivid depiction of the human condition... The viewer aches to make a difference, to do something for these people, who have been brought to life by the skill and empathy of the filmmaker. Public and college library audiences will find much to ponder in this look at how the other three-quarters of the world lives." - William Ward, Booklist.

"VALENCIA DIARY and CELSO AND CORA are the most scrupulous documentary studies there are of Philippine social life." - Robert Nery, Filmnews.

"A rare documentary of high conscience, almost in a class of its own." - John Hinde, ABC Radio.