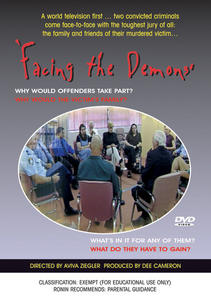 A powerful documentary about restorative justice and conferencing. Two convicted criminals come face-to-face with the toughest jury of all: the family and friends of their murdered victim ...

On one fateful night in 1994, a murder opened up a huge well of unresolved pain, guilt, anger, confusion and frustration. The murdered boy, it soon became clear, was not the only victim of this crime.

In this heart-rending story we meet a cast of characters, all seeking some form of resolution. On the victim's side are the mother and the father, as well as friends and co-workers. On the other side are two of the four convicted of the murder.

And in the middle, the man determined to bring them all together is Senior Sergeant Terry O'Connell of the NSW Police Service.

The confrontation between them offers an opportunity for all those traumatised by the event to hear, for the first time ever, the other's side of the story. Talking directly to each other they have a chance to vent built up emotions, to find answers to unresolved questions and perhaps find a way to move ahead in their lives which have been indelibly affected by a horrific and senseless crime.