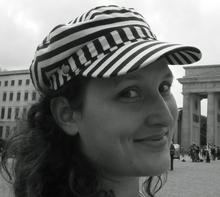 Britt Arthur is an Australian documentary filmmaker a passion for telling personal stories about the world in which we live. Her first documentary Not in Front of the Kids, featuring old people talking about sex won several awards on the festival circuit including 'Best Short Documentary at the 17th WA Screen Awards plus finalist nominations for 'Best Short Documentary' at the 2005 Inside Film Awards, ATOM Awards and the St Kilda Film Festival.

Since then she has worked on over 100 hours of programming for commercial, public and cross-platform broadcast; working with everything from kids, plants and animals, to celebrities and accused war criminals. Britt's latest documentary My Uncle Bluey had its world premiere at the 56th Sydney Film Festival, won the 2009 Australian Director's Guild Award for 'Best Direction in a Short Film' and has been selected to have it's International Premiere in competition at IDFA 2009. She was also short-listed for a 2009 QANTAS Spirit of Youth Award.