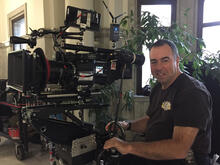 I bought my first Super 8 Camera at the age of 13. Making short dramatic films with my friends or documenting the family vacation, cinematography was my passion.

My next job was at Telescan Productions working as a Director/Cameraman shooting industrial documentaries and commercials.

Toronto became known as 'Hollywood North' and by combining my documentary experience with my Steadicam skills, I was soon working on Features, TV Series and MOW's. I continue to work internationally as a Director of Photography and Camera/Steadicam Operator.

My trademark is "Tell the story through the image".