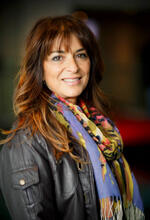 Annette Cohen is an experienced content producer and emerging documentary film maker. She is a graduate of the Australian Film Television and Radio School.

Many years of experience in Government media and public affairs gave her a wealth of insight into Australian society and the pressing issues facing the disadvantaged members of our community.

While working in Government Annette produced many corporate videos and managed the television program Border Security with the Seven Network.

In 2007 she co-produced a 30-minute documentary about four Vietnamese refugees who made Australia home, A Sense of Place, which screened on ABC Compass.

At AFTRS in 2011 she won the Shark Island Documentary Prize for her short film project Michael – the unmaking of a criminal about a former prisoner.

In 2011 she filmed and directed a behind the scenes documentary about the making of Andy X – an online feature film by Jim Sharman exploring the life of Andy Warhol.

In 2018 Annette transitioned her career to freelance producing and documentary film making after completing a Graduate Certificate in Documentary at AFTRS.

Annette is a highly skilled producer, director, cameraperson and editor. She is passionate about social issues and believes in the power of documentary to impact social change.