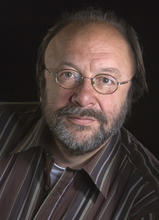 After working in France for 16 years Robin Lutz founded his own company in cultural audio-visual productions in 1988.

This company is focused on author, cultural and informative (feature) documentaries. The Netherlands has a wealthy tradition when it comes to documentaries and luckily it doesn't go by unnoticed. In foreign countries one also recognises this craftsmanship. That's why films made by Robin Lutz win national and international awards frequently due to stylish films with respect to good content.

2016
The documentary film "Spinoza, a free thinker' by Robin Lutz has won a Grand Prix - Golden Dolphin in Cannes on October 13th 2016, during the 7th Cannes Corporate Media & TV Awards.