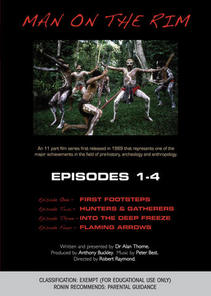 Episode 1: First Footsteps
This episode explores the arrival of the first humans to reach the Pacific Ocean and their transformation into the earliest modern people of the area. The film describes how the first Australians reached their island continent.

Episode 2: Hunters and Gatherers
This is a film about all the different environments of Australia and how Aboriginal people adapted to them all - deserts, coasts, rainforests and the cold of Tasmania. Over 60,000 years and more, people have been adapting to evolving landscapes across Australia.

Episode 3: Into the Deep Freeze
In the northern hemisphere people were evolving - physically and culturally - to the landscapes of Siberia. Gradually they reached all its coastlines and explored its eastern end. We look at the way the Asian bodily features developed in deep cold and the many ways that Asian people learned to make a living in snow and ice.

Episode 4: Flaming Arrows
This is a film about a crucial crossing, from Asia to North America, by small bands of hunters tens of thousands of years ago. It is a film about how the first Americans learned to deal with forests and mountains, deserts and swamps and prairies, and the complex societies they developed in these places.