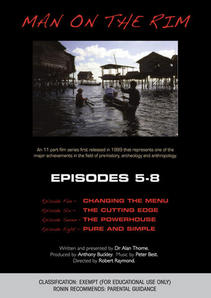 Episode 5: Changing the Menu
More than ten thousand years ago in Southeast Asia an extraordinary discovery was made - how to control animals and plants. The beginnings of domestication ushered in a total change in the way that humans live. We explore the various plants and animals that were tamed and farmed - chickens and rice, mangoes and elephants, cattle and coconuts - and what these things meant to the new societies they created.

Episode 6: The Cutting Edge
Along with the settled life that farming brought was another major change for Asian people - the discover of metals. In Asia copper and tin produced bronze, then iron became steel. New ideas emerged for furnaces and bellows that were to produce harness pieces for horses, spades and ploughs for farming, spears and arrowheads for warfare.

Episode 7: The Powerhouse
Many of the great social and economic changes that took place in Asia helped to produce its most powerful nation, China. In this film we explore some of the great Chinese inventions - silk, irrigation, ceramics, the compass - to see what it was that made China the powerhouse of Asia and soon perhaps of the world itself.

Episode 8: Pure and Simple
In stark contrast to China's social and material complexity stands the simple beauty of so much that is Japan. After repelling the invading Chinese in the 13th Century, Japan cut itself off and began in isolation to build its distinctive culture with its focus on simplicity.

[These 4 episodes are from an 11 part film series which was first released in 1989 and represents one of the major achievements in the field of pre-history, archeology and anthropology. The series is presented by Professor Alan Thorne from the Australian National University, Canberra and was directed by Robert Raymond.]