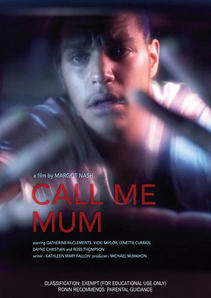 Set in the recent past, the AFI award-winning Call Me Mum is a series of interlinked monologues where five characters unravel a complex tale of mothering, race relations and family in Australia.

Flo hasn't seen Warren since she took him to the hospital on Thursday Island when he was a toddler and the white authorities took him away. But as Warren, Flo and Kate all prepare themselves for the reunion, unbeknown to them, Kate's Brisbane-based parents, Dellmay (Lynette Curran) and Keith (Ross Thompson), are planning a different kind of reunion.

NOTE: For films featuring Ephraim Bani in the Ronin collection, see Cracks in the Mask and The Tombstone Opening.

"Margot Nash's Call Me Mum is among the finest of recent Australian films and certainly one of the most affecting and resonant." - Adrian Martin, The Monthly, February 2007

Margot Nash is interviewed by Felicity Collins about the film, in an article available from The ATOM Education Shop. Visit: theeducationshop.com.au/

"Call Me Mum is an unconventional Stolen Generations film that premiered at the Sydney Film Festival in 2006 and won several Australian Film Institute awards in the following year. This highly stylised, theatrical film explores the experiences of mothers and children involved in the removal of Aboriginal and Torres Strait Islander children from their birth families. Originally envisioned as a four part series of monologues, it is loosely based on writer Katherine Mary Fallon's experiences as a white foster mother of a disabled indigenous child. Call Me Mum adds to a growing collective of films that depict indigenous women, cross-cultural relations and family dynamics in interesting and complex ways. This article uses the idea of a "genderslide" (a misquotation of genocide by one of the main characters) to explain the influence that the three strong but deeply flawed lead female characters in this film have on their son/grandson, as well as the impact of Call Me Mum on viewers. It is the conceptual spaces that constitute the idea of family that I argue are re-shaped by this conflicted depiction of intimate black/white, mother/child relations in Australia."