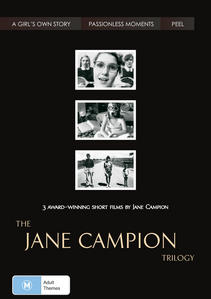 A GIRL'S OWN STORY - Beatlemania, the sixties and growing up. Some stories about girlhood: where family is strange, adulthood lonely, and innocence perverse. Winner - 1984 Rouben Mamoulian Award; Best Direction and Screenplay - 1984 AFI Awards. 1984 - 27 mins - Rated M.

PASSIONLESS MOMENTS - 'There are one million moments in your neighbourhood; each has a fragile presence which fades almost as it forms.' Passionless Moments features 'Sean and Arnold Not Speaking', 'Scottie's Part of the Grand Design of the Universe', 'Angela Eats Meats', 'Sex . . . Thing', 'Ironing on Sunday', 'Sleepy Jeans' and others. 1984 - 12 mins - Rated G. Produced by Jane Campion and Gerard Lee.