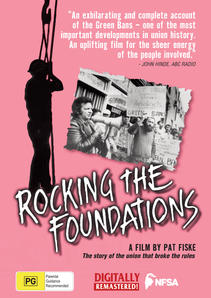 DIGITALLY RESTORED by the National Film and Sound Archive as part of the NFSA Restores program.

An outstanding historical account of the Green Bans first introduced by the New South Wales Builders Labourers Federation in the 1970s in response to community demand to preserve inner- city parkland and historic buildings. One of the first women to be accepted as a builders labourer, filmmaker Pat Fiske traces the development of a quite singular union whose social and political activities challenged the notion of what a union should be.

"An exhilarating and complete account of the Green Bans - one of the most important developments in union history. An uplifting film for the sheer energy of the people involved." - John Hinde, ABC  Radio.

It is a sad reflection on our so-called civilisation that residents of Sydney in times of threat to their homes or way of life are forced time and again to turn to the Builders Labourers Federation, involving them in constant vilification, misrepresentation by the media, and frequent loss of pay. It is a rare thing to find a union with so advanced a social conscience. But how much longer can the citizens of Sydney ask these men to endure the responsibility for protecting a citizen's right to live comfortably and without anxiety, a responsibility that should be taken by the Government if the Government were in good faith?

Neither the NSW Liberal nor the NSW Labour Party appears to have more than a vague program of environmental protection. There is no real indication that historic buildings will not be capriciously destroyed, or that small communities of human beings will not be herded off like cattle, in the rush to accumulate money for certain individuals, and alas, power for the politicians who depend on them.

Anyone in their senses who has visited the large American cities of today (and who among the powerful has not?) ought to see that this is what we are headed for - joyless warrens from which all the peaceful and consoling village aspects of life have been banished. Only the rich can afford to live in such cities because they can escape at will to what the majority are denied. As I see it, the oasis of the backyard is more important than the ultimately suicidal tower if the average citizen in our still developing cities is to preserve his peace of mind. He must also have more say in what is to become of him and his spiritual heritage. These vital needs are, I believe, that the much-maligned builders labourer and those who support him understand.