KEEPERS OF THE STORY - Jandamarra [from the CAAMA Collection] 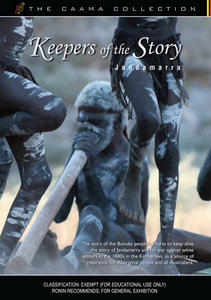 Jandamarra's campaign against white settlers in the Kimberleys in the north of Western Australia in the 1880s remains a source of pride and inspiration for the Bunuba people. A book, a play, and now a documentary film, are helping to bring the story to a wider audience and a new generation of Bunuba people. A feature film is also in development.

Keeping the story of Jandamarra alive sits in the hands of a few key people within the Bunuba nation. Since the passing of a key story-holder, old Banjo Woorunmurra, other senior people like George Brooking, Dillon Andrews, Selena Middleton and actor and singer, Danny Marr (all of whom appear in this documentary), have played an important role in the preservation of this historical saga and the passing of it on to all Australians.

The story-keepers believe that the spirit of Jandamarra is still alive and present in their community. They want to see him turn from a local Bunuba hero into a figure as famous as Ned Kelly and who can become a source of national pride. Filmmaker Mitch Torres, herself a Bunuba woman with a close association to Jandamarra's story, is part of that process of taking the story to a wider audience. She is seen at work on a new feature-length TV documentary about Jandamarra and talks at length about her responsibility to the community in making the film – how the community not only owns the story itself but needs to own the process of making the film, to ensure that the story-telling is correct and consistent with Bunuba aspirations.