OUT OF OUR MINDS 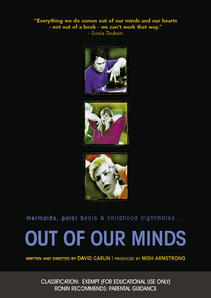 Mark Deans, Rita Halabarec and Sonia Teuben are full-time professional actors and writers with Geelong's Back to Back Theatre. Each of them has intellectual disabilities.

Mark is a brilliant silent clown with an undying love for the Fitzroy Football Club, and a bedroom plastered with lions.

Rita is a diva, a sexy glamour-queen that inhabits a bizarre fantasy world of mermaids and monsters. She is an actor, writer and singer, whose poetic stream-of-consciousness stories of magic gardens, cruelty and true love, helped inspire the creation of Back to Back Theatre in 1997.

Sonia Teuben was given pills as a child to shut her up by family that knew no other way of dealing with her, and ran away from home at 17. She soon discovered not only that she was gay, but that she had a very forthright talent for performing.

We meet Mark, Rita and Sonia through the eyes of Ian Pidd, who joined Back to Back as Artistic Director for four years from 1994-98. He tells his very frank and personal story of the shock of his initial encounter with them, his struggles to find a way to connect with them, and how he came to discover for himself what remarkable artists they were to work with. In particular, we follow the progress of Ian's final show as Artistic Director - a huge outdoor extravaganza called Boomtown.