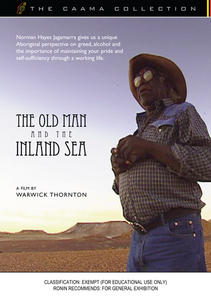 The stark, barren landscapes around Coober Pedy are stunningly photographed by Warwick Thornton, who also directed this outstanding short film. Thornton went on to achieve international recognition in 2009 for his first feature, SAMSON AND DELILAH.

This beautiful documentary is a character study of an old man named Norman Hayes Jagamarra who gave up droving and came to Coober Pedy decades ago to work as an opal-miner. Norman is a "noodler" - someone who sifts through the mining scrap-heaps looking for remnant opals among the rubble. Although Norman qualifies for the old-age pension, he'd rather not take the "sit-down money" and prefers to keep noodling and be self-sufficient.

Norman's reminiscences reveal his dignity and pride in his work. He reflects on his years in the Coober Pedy area, about the devastating impact of the introduction of alcohol and the social dislocation that followed for many Aboriginal people. He also talks about the greed that disrupted the life on the diggings.

Norman's story is backed by a superb original music score by the Dirty Three.