LORE OF LOVE, THE [from the CAAMA Collection] 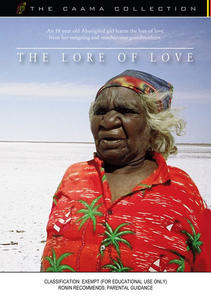 Teenager, Jessie Bartlett Nungarrayi, takes us on a journey from Alice Springs to the ancestral homelands of her Pintubi grandmothers where the old ladies propose to teach her about relationships with men – the lore of love, traditional way.

With her teenage "skin sister", Lizzie, Jessie travels into the remote area around the dried salt-bed of Lake Mackay, straddling the border between the Northern Territory and Western Australia, where her grandfather had lived with his two wives, Mitjili and Nancy. The young girls learn how the two grandmothers had had a combative, jealous relationship early on, but now are great friends. They talk about their first memories of white men who took photos of them (which we see in the film) and took them into town. With much hilarity but with essential seriousness of purpose, the grandmothers talk about birthing practices in the bush, how to attract men with singing, about painting their bodies with white ochre to send a message to men, nose-piercing and coming of age ceremonies. They also explain the fundamental importance of marrying within skin groups and the shame of marrying outside traditional groupings.

Then, back in Alice Springs, Jessie introduces her grandmothers to her own courting rituals in town - specifically the Year 12 Formal which Jessie is dressing up to attend with her boyfriend.

This delightful film is rich in information and ideas about love and marriage, and reveals both differences and similarities between the values of the young generation in town and the traditional life-style "out bush".